This Ground Is Not The Rock I Thought It To Be 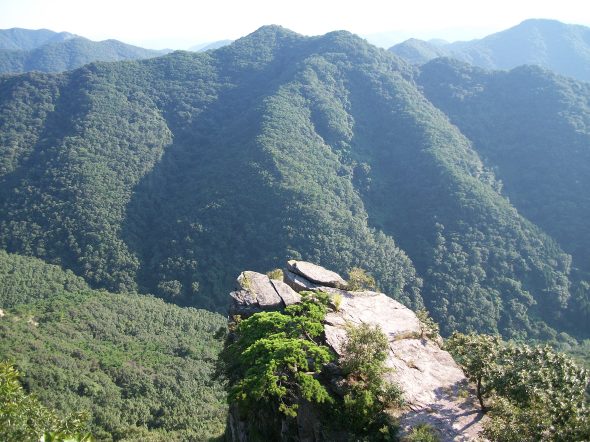 The last time I hiked Mt. Mudeung I admired one of its neighboring peaks from a distance, a large rock outcrop featuring a number of sheer cliff faces. I later learn that it has been given the name Saeinbong. I set out this time to find my way there. It’s a beautiful September afternoon and at times a difficult climb, at others it’s downright grueling. I am rewarded, however, with one of the most enthralling views I’ve ever seen. An ocean of green mountain waves undulating out into the bend of the horizon. I take so many pictures that I begin to feel foolish. The beauty is limitless, almost redundant. I realize that I am never more in the present than when I am humbled by the magnificent vistas of unfamiliar destinations. Too bewildered at how insignificant and small I am, to be concerned with yesterday or tomorrow. Or, perhaps, it’s the entire process. The climb, the exertion. In pursuit of the difficult yet attainable, the prospect of something hard-earned and worthy of all that it cost. A metaphor for the very undertaking that has brought me here in the first place. I have yet to be disappointed when setting off to explore these remote, exotic mountaintops, and I am quickly becoming acquainted with more and more of them.

The following weekend I grab a bus to Busan again. On Saturday I visit the world’s largest department store (seriously, it’s in Guiness) and I buy a book on impulse because it sounds fantastic and the very first line sinks its hooks in deep. When I step outside I see a mountain in the distance covered in craggy spires of rock. There also appears to be a giant golden statue of Buddha peeking above the treetops halfway up its side so I decide to start hiking in that direction and see where it takes me. The first road that I attempt leads me to a dead end but I quickly find another that appears to go in the same direction. This one takes me up steep switchbacks through tightly packed rural hovels that become more and more sparse the higher I journey. After about an hour, thankful for the exercise but close to giving up the pursuit of a noteworthy perch from which to view the city, I reach a temple which is home to the aforementioned Buddha. From here I locate another path that seems to wind back out towards the face of the mountain and continue climbing for another hour or so until I discover what I was looking for. It’s remarkable this countryside. On foot, I can walk from the largest shopping complex on the planet to a mountaintop where I can then overlook the second largest city in the country in just an afternoon. The mountain is called Jangsan, and I never actually make it to the peak but do manage to find myself a view of the coastal city of Busan that I won’t soon forget.

The temperature is beginning to drop, autumn is preparing to roost before the onset of less accommodating weather. I resign myself to spend each of the remaining weekends exploring a new, unplumbed mountainside or national park or other Korean gem I have still to lay eyes on.

Yesterday, as is my habit, I roll over before rising from bed to begin the long, hard-fought process of starting up my antiquated laptop. I nod off while waiting for the internet homepage to load and then direct the browser to my email inbox when it finally does. I see that I’ve received a message from my step-sister who has been selflessly caring for my dog while I am away. Yet again, I’m confronted with heart-breaking news regarding his condition. He is having difficulty standing and getting around, and has of late been refusing food and water. The loss of muscle mass and connective tissue is beginning to warp his spine. He does not whine or cry out, I’m told. But then he wouldn’t. There is talk of putting him down and two days later it’s done.

I try to come to terms with this knowledge that the last time I saw him is the last time I ever will. All those times I grieved for him, believing that I was losing him, and this time it’s real. I am mourning the loss of my best friend in this place where I have none. My sorrow is compounded by the punishing certainty that I’ve abandoned him when he needed me most. For over nine years I was all that dog knew, his constant companion, and in the last–assuredly the most difficult–five months of his life, I was nowhere that he could find me. I was in such a goddamned hurry to leave. Was that precisely the instrument, then? Was my leaving the coup de grace? Perhaps, I’m erring a little into the melodramatic but this loss unmans me entirely.

Work is a chore requiring great effort and better composure than I possess. I am unfocused and vacant, and it is obvious. My employer inquires as to the nature of my disposition. When I explain, she looks at me like I’m a sentimental idiot, like some sad, weeping lunatic becoming overly emotional about the death of a plant. She smiles politely and says, “We had pets growing up.” I attempt a smile in return and that seems to conclude the conversation.

One of my more perceptive students asks, “Teacher? Sad?”

This entry was posted on October 4, 2010 by Troy J. Craig. It was filed under Drivel and was tagged with Busan, Dogs, Hiking, Jangsan, Mt. Mudeung, Saeinbong, South Korea, Tool, Travel.