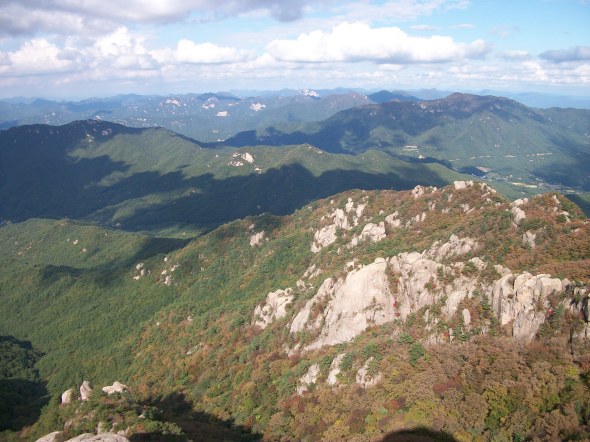 In the weeks that follow my dog’s death, I punish myself–for whatever culpability I might claim for his demise–on progressively higher climbs into the mountains of South Korea. I’ve committed myself fully to the pursuit of the most impressive peaks this country has to offer. This is how I grieve. It cannot be overstated how beneficial the exercise and scenery is for my state of mind. A greater medication I haven’t found. Each weekend I’m hopping from big buses from big cities, onto smaller buses in smaller cities that serve as the disparate gateways to these majestic monsters looming above them all. I reflect on my first month here spent in a kind of trepidation at the thought of attempting to make my way from one location to the next in this insane, confounding carnival. I still get lost, but never for very long. Reading the language is almost effortless now, and fortunately the Korean term for bus terminal is “bus terminal.”

The reception of English-speaking foreigners in the more rural locales I’ve visited is even warmer than what I’ve already come to expect in the larger cities. On the trails, entrenched in the belly of the Korean hiking subculture, it’s even more so. No one is surly or disagreeable on the slopes of Songnisan, not even after climbing a thousand meters into the sky. I encounter no discourtesy on the Cloud Bridge spanning one of the many chasms of Wolchulsan. It’s a pleasure to see you, an honor that you’ve taken the time to visit this part of the world. Are you hungry or tired? Rest, please, have something to eat.

I behold such sights on these excursions as to almost believe that by tossing a rock into the distance I might expose the whole scene for a well-constructed forgery or illusion. One such vision can be found from the highest point on Mt. Songni, or Songnisan, situated in the center of the peninsula. I begin the hike later than anticipated, and start out from one of the larger Buddhist temples in the country, heading towards the second highest peak called Munjangdae. It takes a little over two hours of pleasant but demanding exertion, under cover of foliage just beginning to flaunt its reds and yellows, before I reach the rock for which the peak is named. The weather is perfect and I pass hordes of Korean hikers heading in both directions. It occurs to me that I never tire of this: the sunshine, the white clouds hanging in a blue sky, casting their enormous shadows over green treetops. On how many days have I woken to the exact same thing? I’m grateful that it still has the force to steal my breath.

From Munjangdae, it’s another two and a half hours across the ridge to Cheonhwangbong, the highest peak. Hiking through bamboo as tall as I am, I’m occasionally granted a glimpse of the landscape beyond, and am reminded of the weirdness of precisely where I am, where I’m from and how I came to be here. I’m aware that the day is growing late, and have come to accept that at least part of my descent will be made in the dark. It’s been more than an hour since I’ve heard another human being, let alone seen a fellow hiker. You have to have hiked in this country before at some point to fully understand how alarming this can be. The tall, wet bamboo eventually gives way to a meadow of brown and green grasses that blankets the saddle between the peak known as Birobong and the summit just ahead. For what might be the third or fourth time in the last five hours, I tell myself that I have never seen anything so beautiful in all my life. Another half hour up a comparatively gentle slope, and I’m clambering over the last few boulders on hands and knees to what feels like the zenith of the world. It’s a modest piece of land, not much to it really, and yet at this very moment, I am certain it must command one of the prettiest, most quieting views that this planet has to offer. And it’s mine and mine alone, save the large flock of cawing black birds I scare into the fading orange light of the sky. So much sky … and an infinite ocean of verdant hills and valleys coupling beneath me to the limits of my vision. I feel exposed, vulnerable, stripped of all pretense but comfortably so, like being judged and not found wanting for anything. I stand above all that can be seen, above the mountains afar, above all other souls that have long since begun their descents, above all that is civilized and the worries of men. It’s a tiny, private heaven on Earth, and I can stay but only briefly.

Climbing down this mountain would be treacherous in the light of day. At dusk, it is a whole other beast entirely. My feet ache and I half expect to find them swollen, misshapen and black when I next have the luxury of removing my boots. My legs are weak and wobble as they do after sex. Nearly halfway down, I notice a curious give in my left knee, something beyond mere fatigue that would maybe worry me more if I weren’t so giddy from the joys I’ve just experienced. Night falls and I hear rushing streams and waterfalls but fail to illuminate them with my little flashlight. I don’t, however, miss two giant, pink slugs as long as my hand and as thick as my forefinger, scumming and sliming their way across my path. After seven straight hours of hiking, I finally limp into the small gathering of restaurants and shops that serve the visitors of Songnisan. I find a cheap motel room, and enjoy a hot shower, a change of clothes and a meal of barbecued duck across the street. The only road leading into the temple I mentioned earlier becomes a strip of neon lights at night. Street vendors and other travelers and backpackers shuffle about, looking for entertainment or sustenance. It’s all here because the mountain is. The people are kindred spirits, and I enjoy their company before retiring to my room, exhausted, to watch an episode of Shark Week with Korean subtitles.