I don’t have a TV, nor can I read Korean newspapers, but I still catch wind of new threats being made by my crazy neighbors to the north. It’s the sort of talk that gets around. I say “my neighbors” because for the time being, that’s exactly what they are. Living here, you can’t imagine it’s anything like an insane, belligerent and irrational Canada threatening the U.S. with nuclear annihilation; you have to imagine an insane, belligerent and irrational New Jersey threatening Delaware with nuclear annihilation. It’s slightly closer to a psychopath than I would prefer to live. Now, I’m not exactly up to speed on what kind of military capabilities the North possesses, but the very fact that your next door neighbor is threatening to rig your doorstep with any kind of explosive can be a little unsettling.

I can’t pinpoint why exactly, but it doesn’t bring about the anxiety I might have thought it would. There is even a depraved side of me that secretly yearns for some survivable disaster, a calamity from which I can most certainly escape with a new and remarkable story to tell. That’s the key though, isn’t it? Surviving the ordeal. Preferably with all motor skills, cognitive abilities and limbs intact. I find myself contemplating death a lot during my stay here. My death, mind you … not yours. It’s not simply a morbid byproduct of my current proximity to these recent hostilities. There’s more. I think the absence of familiar comforts plays a role. Without ever having to consciously acknowledge it before, I want to die in comfort, surrounded by more friends than I actually have. Like a going away party where I leave just before things get really out of control. Granted, I have grown comfortable with some aspects of life in South Korea, accustomed to certain things. There are countless meals and dishes I know I will crave almost immediately upon returning. The fascination of strangers with my whiteness no longer holds the same amusement for me as it once did. I’ve even come to embrace the bareness of my living accommodations. But these aren’t exactly the sort of comforts that would in any way help to put you at ease at the inception of your mortal demise. So in spite of these, I still–countless times throughout the day–say to myself, I do not want to die in South Korea. And I mean it.

Before Christmas, I’m looking for strange, unique oddities to send home, bizarre gifts or trinkets of a manageable size that I can mail to my family. It occurs to me that I’m so out of touch that some of this crap could very well have been among the popular kitsch that was available in the States before I even left. I’m curiously investigating solar-powered, bobble-headed, brightly colored plastic gadgets and doodads and wondering if they’d be novel to my nephews back home, or only to me.

I don’t think I ever worried so much about being a douche bag until I became an uncle. My nephews don’t look to me to provide them with any sense of right or wrong. This is already provided for them by their parents. I have no serious responsibility to them. I feel like my only real job where they’re concerned is to be likable and maybe buy them some cool shit from time to time. There’s something about this relationship that strikes me as being almost more demanding than that of a parent and a child.  I mean, anybody can tell a kid to mind their manners, treat people the way that you want to be treated, don’t lie, cheat or play in your own feces. Brush your teeth. Go to bed. Stop playing pee-pee tag. How difficult is it really to be a parent these days? Any moron with a vagina can do it. It takes something special to pull off being a good uncle.  I have to be cool. That’s a lot of pressure. No child thinks his parents are cool, but kids are supposed to like their uncles. What does it say about me if I fail at something at which even children think I should be good?

Christmas comes and goes with very little fanfare in Korea. The music can be heard in the overpriced coffee shops, Korean renditions of the more popular songs. Decorations can be seen hanging in several locations. My students tell me that most families do not exchange presents but instead go out to eat in nice restaurants, so I decide to treat myself to some western-style comfort food at a T.G.I. Friday’s.

The week that follows is a vacation from work, so I take the opportunity to visit the island of Jeju to the south. It’s Korea’s most famous island and home to the country’s largest peak: Hallasan. I scout the local weather predictions and try to determine the most agreeable day to make the arduous climb to the summit. To reach the highest point of the rim on the mouth of Hallasan’s dormant volcano, there is a shelter that must be reached first, and it must be reached by noon during the winter months or you will not be allowed to pass. This is to eliminate the need for nighttime rescue attempts and to ensure that no one is forced to make the long, demanding descent in the dark. I arrive at the entry point before sunrise and stop into a store near the trail to purchase some gloves. The man behind the counter places a thirty dollar pair of crampons in front of me and begins to communicate one of two messages: either that I not even attempt to climb this mountain at all without them, or that I truly don’t need them at all to climb this mountain. I’m certain it’s the former, but since most Korean hikers arm themselves with all manner of unnecessary equipment from ski poles to helmets, I assume my Gore-Tex boots will suffice. I am wrong. 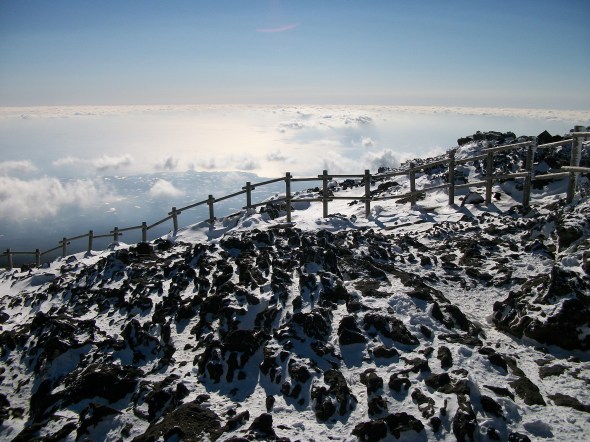 Every inch of the trail is buried in snow made slick by the trampling of those who have gone before me. The mountain is as wild and untouched as anything I’ve seen in Korea, made even more so by its frozen, crystallized state. The slopes possess a gentle incline, but they are long, and progress is slow. Hours pass with very little change to my surroundings of laurel and both leafless and evergreen trees rising up from the pristine landscape of bright, clean snow. The forest looks as sedate as the volcano on which it rests. My climb is a fight that takes place more in the mind than in the lungs. It’s late in the morning when the final two kilometers of the trail begin to steepen. In many places, I have less than a meter of width to a path that snakes its way around the sharply rising cone. It is during this last stretch of the ascent that I am now exposed to the full brunt of the elements. The sky is a clear and perfect blue, but the sudden force of the wind is enough to stagger me. Snow that hasn’t been beaten down is easily lifted and whipped about with a ferocity that abrades any exposed skin. Because I chose to forgo the crampons, I must pick my steps carefully, and I slip often. More than once I lose my balance and dig wildly and desperately into the snow itself for a handhold. When I stop to take in the view I am astonished by what can be seen at this elevation. I am literally above the clouds, and the land and sea beneath them appear as if under some barely transparent veneer. There is a definite bend to the horizon, and the sight is only rivaled by those that I’ve seen from the windows of airplanes. Approaching the peak, a set of wooden stairs has been built where snow and frost are accumulating and growing out from the sides of the wooden guide posts like horizontal stalagmites–driven there by the terrific, interminable wind. Layers of clothing are lifted and pulled from my body while snow and tiny bits of ice seize the opportunity to enter. When I finally reach the summit the wind is so intense that it’s difficult to keep my eyes open for very long. At the highest point on the rim I manage to briefly steady myself for an instant to look into the gaping maw of this long dormant monster. I shoot a few pictures of the frozen crater lake and try to appreciate the moment as best I can but quickly turn back to begin the more treacherous return below. All that time and effort, I think to myself, for the briefest of moments that I can just barely see or enjoy.

It’s the nicest weather I see all week and a number of options are immediately removed from the itinerary as a result. Attractions are closed. Festivities are canceled. A friend suggests taking a bus out to Seongsan where a volcanic crater with vertical cliffs named Sunrise Peak rises up from the shore. It’s the easternmost tip of Jeju island and therefore the first place to see each day’s new sun. We read the following information on the official website for the town’s annual New Year celebration: “On December 31, in celebration of the New Year, there is a torchlight show, a campfire and fireworks. A traditional shamanic ritual called gut is performed along with other fascinating performances.” It’s the “shamanic ritual called gut” that seals the deal for me, so we waste little time and catch a bus to Korea’s premier New Year’s party on the day of New Year’s Eve. I think to sneak  a few minutes of rest on the ride out until I am startled awake by the almost crashing of our bus on the slush-slick roads. After securing a room for the night, we find ourselves a bowl of chigae in a small, unassuming restaurant where the verbose drunkard sitting next to us alternates between talking ceaselessly to himself and shouting in Korean at us. I assume that before long things will become naturally apparent, that some semblance of celebration will begin to take shape. Again,  I am wrong.

We ask around. We are told that the festival has been called off on account of the weather. We are told that people will still be getting up early to view the sunrise from the famous Sunrise Peak on the top of the volcanic crater. It hails. We wander aimlessly. We join an inviting trio on their way to a karaoke room then elect to tick off the remaining minutes of 2010 while watching a CSI marathon on the Super Action channel in our motel room. We fall asleep to the comforting sounds of softcore Japanese porn. We rise before the much anticipated sun and walk to the entrance to the peak. We are told that we cannot climb to Sunrise Peak, the trails are presumably too icy and dangerous. A formidable mob gathers and we join it as it pushes onward towards the base of the crater. We huddle in the cold, windy dark, waiting for the sun to once again begin its ancient circuit. We wait. And we wait. We joke that maybe it won’t rise today, and then a funny thing happens … it doesn’t. The world is gradually illuminated. We begin to look around at one another, as if someone might offer an explanation, while day breaks behind an obstinate curtain of cloud without any one of us ever actually catching sight of the sonofabitching sun.